Concerns Rise Over Transgender Violence Since the 2016 U.S. Presidential Election 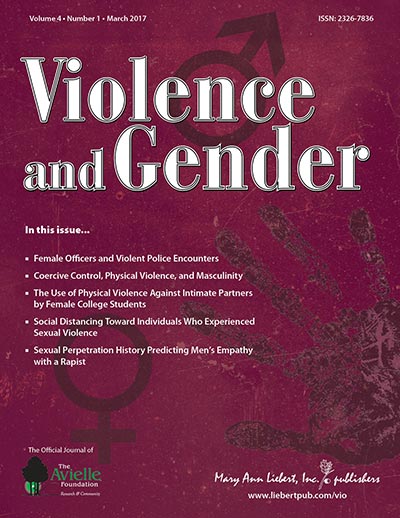 New Rochelle, NY, March 13, 2018–A national sample of transgender and gender non-conforming individuals reported high levels of concern about violence and discrimination related to the 2016 U.S. Presidential election in a new study. The majority of study participants had been directly exposed to hate speech and violence, and many expressed concerns that the election may have emboldened and legitimized these acts, according to an article published in Violence and Gender, a peer-reviewed journal from Mary Ann Liebert, Inc., publishers. The article, which is part of a special section on Transgender Violence is available free on the Violence and Gender  website.
The article entitled "'I Fear for My Safety, But Want to Show Bravery for Others': Violence and Discrimination Concerns among Transgender and Gender Non-Conforming Individuals after the 2016 Presidential Election” was coauthored by Cindy Veldhuis, Columbia University School of Nursing (New York, NY) and colleagues from San José State University (CA), University of Kentucky (Lexington), University of California Department of Medicine, and University of Illinois at Chicago College of Nursing. The researchers gathered information from a national sample of transgender, genderqueer, and gender non-conforming individuals about their concerns and experiences related to discrimination, violence, and hate crimes between December 2016 to May 2017.
In the article “'We Do Not Matter': Transgender Migrants/Refugees in the Dutch Asylum System,” Yvon van der Pijl and coauthors from Utrecht University (The Netherlands) and the European Commission (Brussels, Belgium) present a stark and disturbing picture of this population as being at the same time visible – with their sexual/gender identity stigmatized – and invisible and politically irrelevant. The authors contend that the Dutch authorities offer transgender migrants/refugees compassion and pity rather than equal rights and full citizenship.
Tamar Goldenberg and colleagues from University of Michigan (Ann Arbor) coauthored the article entitled “Intimate Partner Violence among Transgender Youth: Associations with Intrapersonal and Structural Factors.” In this study of transgender and gender non-conforming young people, 45% reported personal experience with intimate partner violence (IPV). The study identified specific factors more likely to be associated with a history of IPV, such as previous imprisonment, participation in sex work, and symptoms of depression. This information can help better target effective IPV prevention and services to youths affected by this type of violence.
"Over the last several months, Violence and Gender has received incredible manuscripts in the area of IPV and transgender individuals. We have learned so much from the research in this area, and this manuscript by Dr. Goldenberg and her colleagues provides significant insights into prevention and services for the practitioner as well as for researchers who are looking at similar areas," says Editor-in-Chief Mary Ellen O'Toole, PhD, Forensic Behavioral Consultant and Senior FBI Profiler/Supervisory Special Agent (ret.) and currently, Director of the Forensic Sciences Program, George Mason University, Fairfax, VA.
About the Journal
Violence and Gender is the only peer-reviewed journal focusing on the understanding, prediction, and prevention of acts of violence. Through research papers, roundtable discussions, case studies, and other original content, the Journal critically examines biological, genetic, behavioral, psychological, racial, ethnic, and cultural factors as they relate to the gender of perpetrators of violence. Led by Editor-in-Chief Mary Ellen O'Toole, PhD, Forensic Behavioral Consultant and Senior FBI Profiler/Criminal Investigative Analyst (ret.), Violence and Gender explores the difficult issues that are vital to threat assessment and prevention of the epidemic of violence. Violence and Gender is published quarterly online with Open Access options and in print, and is the official journal of The Avielle Foundation. Complete tables of content and a sample issue may be viewed on the Violence and Gender  website.
About the Publisher
Mary Ann Liebert, Inc., publishers is a privately held, fully integrated media company known for establishing authoritative peer-reviewed journals in many promising areas of science and biomedical research, including Cyberpsychology, Behavior, and Social Networking and Journal of Child and Adolescent Psychopharmacology. Its biotechnology trade magazine, GEN (Genetic Engineering & Biotechnology News), was the first in its field and is today the industry's most widely read publication worldwide. A complete list of the firm's 80 journals, books, and newsmagazines is available on Mary Ann Liebert, Inc., publishers website.