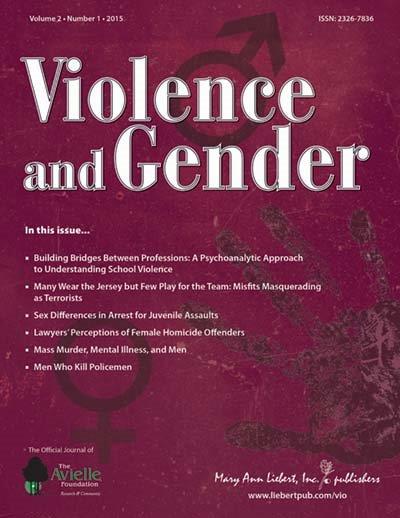 New Rochelle, NY, May 11, 2015–Mass murders in the United States are rare, but they receive a lot of media attention and are the focus of an ongoing controversy regarding the link between mass murder and mental illness among the perpetrators of these heinous acts, almost always men. The mental health problems most common in mass murderers and why men at risk are so difficult to identify before they can carry out mass killings are discussed in the compelling article “Mass Murder, Mental Illness, and Men” in the peer-reviewed journal Violence and Gender, from Mary Ann Liebert, Inc., publishers. The article is available free on the Violence and Gender website until June 11, 2015.

Author Michael Stone, MD, Columbia College of Physicians and Surgeons and Mid-Hudson Forensic Psychiatric Hospital, New York, NY, provides an in-depth look at the scope of mass murders committed in the U.S. during recent decades, describing the crime as “an almost exclusively male phenomenon.” Most mass murderers have a mental illness characterized by a paranoid personality disorder that includes a deep sense of unfairness and a skewed version of reality. Unfortunately, this profile of the men who have committed mass murders has often led to the unwarranted stigmatization of the mentally ill as a group as being inherently dangerous, which is not the case.

Dr. Stone points in particular to the growing availability of semiautomatic weapons as a key factor contributing to the increasing rate of random mass shootings in the U.S. during the past 65 years. The number of events nearly doubles in the 1990s compared to the 1980s, for example.

“This article by Dr. Stone goes right to the issue of mental health and its role in mass murder,” says Violence and Gender Editor-in-Chief Mary Ellen O'Toole, PhD, Forensic Behavioral Consultant and Senior FBI Profiler/Criminal Investigative Analyst (ret.) and Director of the Forensic Sciences Program, George Mason University. “Too often there is an assumption that this behavior can be explained or even ‘excused’ because of a preexisting mental health problem. Dr. Stone, an international expert in this field, provides insights into this behavior based on his very comprehensive and timely research on mass murders, which every professional working in the field must read.”

About the Journal
Violence and Gender is the only peer-reviewed journal focusing on the understanding, prediction, and prevention of acts of violence. Through research papers, roundtable discussions, case studies, and other original content, the Journal critically examines biological, genetic, behavioral, psychological, racial, ethnic, and cultural factors as they relate to the gender of perpetrators of violence. Led by Editor-in-Chief Mary Ellen O'Toole, PhD, Forensic Behavioral Consultant and Senior FBI Profiler/Criminal Investigative Analyst (ret.), Violence and Gender explores the difficult issues that are vital to threat assessment and prevention of the epidemic of violence. Violence and Gender is published quarterly online with Open Access options and in print, and is the official journal of The Avielle Foundation. Tables of content and a sample issue may be viewed on the Violence and Gender website.

About the Publisher
Mary Ann Liebert, Inc., publishers is a privately held, fully integrated media company known for establishing authoritative peer-reviewed journals in many promising areas of science and biomedical research, including Cyberpsychology, Behavior, and Social Networking and Journal of Child and Adolescent Psychopharmacology. Its biotechnology trade magazine, Genetic Engineering & Biotechnology News (GEN), was the first in its field and is today the industry's most widely read publication worldwide. A complete list of the firm's 80 journals, books, and newsmagazines is available on the Mary Ann Liebert, Inc., publishers website.