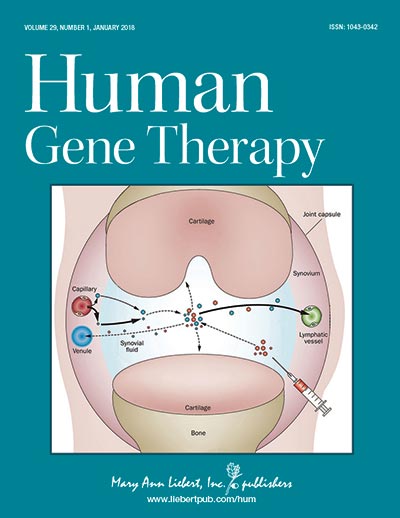 James M. Wilson, MD, PhD and coauthors from the University of Pennsylvania Perelman School of Medicine, Philadelphia, evaluated the ability of an AAV9 variant (AAVhu68) to deliver a human gene to motor neurons in the spinal cords of young rhesus macaques and pigs. AAV9 is the same viral vector recently used successfully to deliver a therapeutic gene to infants with spinal muscular atrophy (SMA). High-dose intravenous gene therapy administration led to severe toxicity affecting the liver and motor neurons, with symptoms appearing within 5 days of treatment. The researchers reported their findings in the article entitled "Severe Toxicity in Nonhuman Primates and Piglets Following High-Dose Intravenous Administration of an AAV Vector Expressing Human SMN."

Human Gene Therapy Editor-in-Chief Terence R. Flotte and Editor of Human Gene Therapy Methods Hildegard Büning urged the gene therapy community to interpret and respond to these findings "in a balanced and responsible fashion," neither ignoring them nor over-reacting, in their Editorial entitled "Severe Toxicity in Non-Human Primates and Piglets with Systemic High-Dose Administration of AAV9-Like Vectors: Putting Patients First." The editors point out the important limitations of the current study and suggest "that the one and only guiding principle in critical moments like this should be the welfare of patients with the diseases being treated with these therapies."

“We advocate for full transparency with all relevant safety data from all laboratories, whether within academia, industry and government. While not all sources of vector are of equivalent quality and purity, the true properties of possible AAV9(-like) vector toxicities will inevitably be best illuminated by multiple different studies being performed by multiple independent groups. This is not a time to protect proprietary interests or academic rivalries. We assert this not out of naïveté, but rather based on our conviction that if the gene therapy research community makes patient welfare as the sole priority, it will ultimately be beneficial to us all,” says Editor-in-Chief Terence R. Flotte, MD, Celia and Isaac Haidak Professor of Medical Education and Dean, Provost, and Executive Deputy Chancellor, University of Massachusetts Medical School, Worcester, MA.

About the Journal
Human Gene Therapy, the Official Journal of the European Society of Gene and Cell Therapy, British Society for Gene and Cell Therapy, French Society of Cell and Gene Therapy, German Society of Gene Therapy, and five other gene therapy societies, is an authoritative peer-reviewed journal published monthly in print and online. Led by Editor-in-Chief Terence R. Flotte, MD, Celia and Isaac Haidak Professor of Medical Education and Dean, Provost, and Executive Deputy Chancellor, University of Massachusetts Medical School, Human Gene Therapy presents reports on the transfer and expression of genes in mammals, including humans. Related topics include improvements in vector development, delivery systems, and animal models, particularly in the areas of cancer, heart disease, viral disease, genetic disease, and neurological disease, as well as ethical, legal, and regulatory issues related to the gene transfer in humans. Its companion journals, Human Gene Therapy Methods, published bimonthly, focuses on the application of gene therapy to product testing and development, and Human Gene Therapy Clinical Development, published quarterly, features data relevant to the regulatory review and commercial development of cell and gene therapy products. Tables of contents for all three publications and a free sample issue may be viewed on the Human Gene Therapy website.

About the Publisher
Mary Ann Liebert, Inc., publishers is a privately held, fully integrated media company known for establishing authoritative peer-reviewed journals in many promising areas of science and biomedical research, including Nucleic Acid Therapeutics, Tissue Engineering, Stem Cells and Development, and Cellular Reprogramming. Its biotechnology trade magazine, GEN (Genetic Engineering & Biotechnology News), was the first in its field and is today the industry’s most widely read publication worldwide. A complete list of the firm’s 80 journals, books, and newsmagazines is available on the Mary Ann Liebert, Inc., publishers website.