The Impact of Political Spending by Nonprofits on the 2012 Election 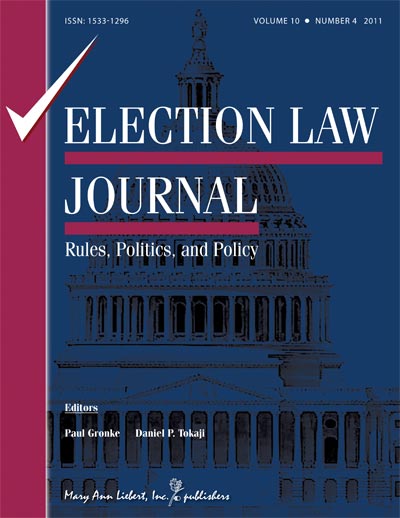 New Rochelle, NY, October 16, 2012—One of the most important developments in this election cycle is the increasingly important role of campaign spending by outside groups, including nonprofit organizations. Recent articles in Election Law Journal, a peer-reviewed publication from Mary Ann Liebert, Inc., publishers, explore the increase in spending by these groups, including the potential impact of the Supreme Court’s ruling in Citizens United v Federal Election Commission, which lifted the ban on campaign expenditures from corporate treasuries. Some experts believe that the increased spending by outside groups this year may affect close elections, including the 2012 presidential election in which the final outcome will likely depend on which candidate wins key battleground states like Florida, Ohio, North Carolina, and Virginia. The articles are available free online on the Election Law Journal (ELJ) website.

In the article “Nonprofits and Disclosure in the Wake of Citizens United,” Richard Briffault, Professor of Legislation at Columbia Law School, noted that the Citizens United decision launched “an intense media and public outcry” for greater disclosure on the sources of nonprofit political contributions and signaled that broader laws requiring disclosure of these donors may be constitutional.

In “Campaign Disclosure and Tax-Exempt Entities: A Quick Repair to the Regulatory Plumbing,” Donald Tobin, Associate Dean and Professor of Business Law at Moritz College of Law, The Ohio State University, recommends some quick regulatory fixes and new regulations the U.S. Treasury could put in place to ensure that nonprofit groups comply with disclosure rules and are not able to make excessive undisclosed expenditures.

In “Introduction to Shadows and Light: Nonprofits and Politics in a Post-Citizens United World,” Lloyd Hitoshi Mayer, Associate Dean and Professor at University of Notre Dame Law School, reviews the federal tax law limits on lobbying by charities, the immediate effects of the Citizens United decision on those limits, and how the decision and institutional rights may affect the government’s ability to restrict the relationships between charities and their non-charitable affiliates that participate in lobbying.

“The rules regarding political spending by outside groups have changed dramatically in the past few years,” says Daniel Tokaji, Co-editor of Election Law Journal and Robert M. Duncan/Jones Day Designated Professor of Law at The Ohio State University, Moritz College of Law. “These changes have already had a major impact on this year’s election, and more changes are likely in years to come. Election Law Journal’s articles on nonprofit spending are essential reading for those seeking to understand Citizens United and related shifts in the campaign finance landscape.”

About the Journal
Election Law Journal is an authoritative peer-reviewed journal published quarterly in print and online. Led by Co-Editors Paul Gronke of Reed College and Daniel P. Tokaji of The Ohio State University, Moritz College of Law, the Journal covers the field of election law for practicing attorneys, election administrators, political professionals, legal scholars, and social scientists, and covers election design and reform on the federal, state, and local levels in the U.S. and in 75 countries around the world. Complete table of contents and a sample issue may be viewed online on the Election Law Journal website.

About the Publisher
Mary Ann Liebert, Inc., publishers is a privately held, fully integrated media company known for establishing authoritative peer-reviewed journals in many promising areas of science and biomedical research, and law, including Biotechnology Law Report, Gaming Law Review and Economics, and Environmental Justice. Its biotechnology trade magazine, Genetic Engineering & Biotechnology News (GEN), was the first in its field and is today the industry’s most widely read publication worldwide. A complete list of the firm’s 70 journals, books, and newsmagazines is available on the Mary Ann Liebert, Inc., publishers website.