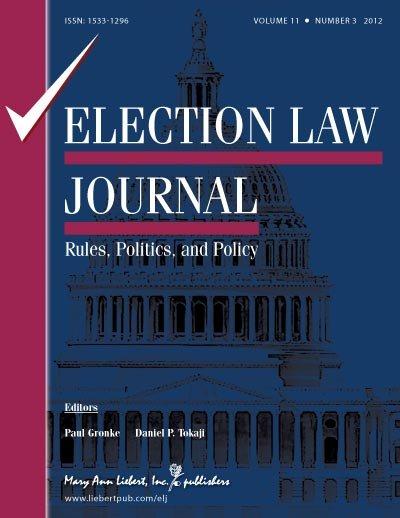 New Rochelle, NY, October 22, 2012—Will new voting laws, including photo ID requirements, create barriers to voting? Will they impose an unequal burden on participation by some groups of American voters? Are they justified by the need to prevent voting fraud and promote election integrity? Expert views and contrasting opinions on the need for and potential impact of these new state laws are presented in articles in Election Law Journal, a peer-reviewed publication from Mary Ann Liebert, Inc., publishers.  The articles are available online on the Election Law Journal website.

The Supreme Court upheld Indiana’s photo ID requirement in 2008, in the Crawford v. Marion County Election Board decision. Since 2011, a number of state legislatures have enacted new restrictions on voting. These include photo ID requirements, as well as limitations on early voting and voter registration. In some states, these laws have been enjoined or limited by court orders, but some voter ID laws will be in effect—in whole or in part—for the 2012 election.

Hans von Spakovsky, a senior legal fellow at The Heritage Foundation, Washington, DC, argues for photo ID requirements in “Protecting the Integrity of the Election Process.” According to Mr. von Spakovsky, “It is critically important that states implement measures that help improve the security and integrity of our elections. Ensuring fair elections requires that individuals authenticate their citizenship when they register and their identity when they vote.” He also contends that “such minimal requirements do not depress the turnout or have a disparate impact on minority, poor, or elderly voters.”

Justin Levitt, an associate professor of law at Loyola Law School in Los Angeles, argues against photo ID laws and other new restrictions on voting in “Election Deform: The Pursuit of Unwarranted Electoral Regulation.” Professor Levitt contends that the burdens imposed by these new laws are not only real and inequitable, but also unnecessary. Furthermore, says Levitt, several of these laws “appear to exact real burdens on real Americans, making it more difficult for citizens to exercise their rights to vote.”

“For the past several years, we have seen a fierce debate over voter ID, which has only intensified during the 2012 election cycle,” says Paul Gronke, Co-Editor of Election Law Journal and Professor of Political Science at Reed College, Portland, OR. “Supporters of these laws argue that they are needed to promote integrity, while opponents argue that they will suppress participation. While some of these laws have been stopped by court orders, others will be in effect for the 2012 election. We will probably be assessing and debating their impact, on both voter turnout and electoral fraud, for many years to come.”

About the Journal
Election Law Journal is the authoritative peer-reviewed journal on election law, policy, and administration published quarterly in print and online. Led by Co-Editors Paul Gronke of Reed College and Daniel P. Tokaji of The Ohio State University, the Journal covers the field of election law for practicing attorneys, election administrators, political professionals, legal scholars, and social scientists, and covers election design and reform on the federal, state, and local levels in the U.S. and in 75 countries around the world. Complete tables of content and a free sample issue may be viewed online on the Election Law Journal website.

About the Publisher
Mary Ann Liebert, Inc., publishers is a privately held, fully integrated media company known for establishing authoritative peer-reviewed journals in many promising areas of science and biomedical research, and law, including Biotechnology Law Report, Gaming Law Review and Economics, and Environmental Justice. Its biotechnology trade magazine, Genetic Engineering & Biotechnology News (GEN), was the first in its field and is today the industry’s most widely read publication worldwide. A complete list of the firm’s 70 journals, books, and newsmagazines is available on the Mary Ann Liebert, Inc., publishers website.