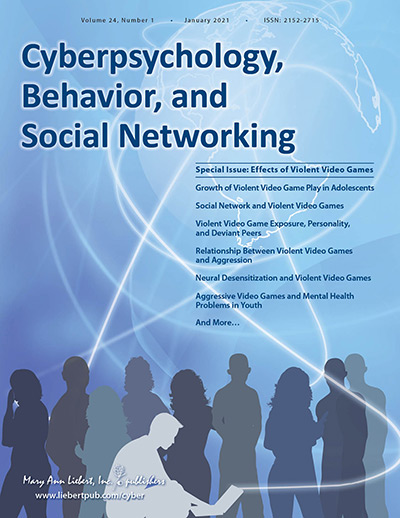 New Rochelle, NY, January 13, 2021—Aggressive video games are not a risk factor for mental health problems, according to a new study of more than 3,000 youth. This study is part of a special issue on the effects of violent video games published in the peer-reviewed journal Cyberpsychology, Behavior, and Social Networking. Click here to read the issue now.

In an editorial entitled, “Effects of Violent Video Games: 50 Years On, Where Are We Now?” Guest Editors of the special issue, Simon Goodson, PhD and Kirstie Turner, PhD, University of Huddersfield, state: “The aim of this special issue is to present empirical findings based upon meticulous research in order to provide a more informed resource for the debate of the effects of playing violent video games.”

“Video games have been criticized from the moment they came into being and, like with most other new technologies, we’ve discovered there are benefits as well as shortcomings to consider. My hope is that by publishing this special issue, highlighting cutting-edge research with objective data, we may come to better understand both the promise and peril of videogames,” says Editor-in-Chief Brenda K. Wiederhold, PhD, MBA, BCB, BCN, Interactive Media Institute, San Diego, California and Virtual Reality Medical Institute, Brussels, Belgium.

About the Journal Cyberpsychology, Behavior, and Social Networking is an authoritative peer-reviewed journal published monthly online with Open Access options and in print that explores the psychological and social issues surrounding the Internet and interactive technologies.  Complete tables of contents and a sample issue may be viewed on the Cyberpsychology, Behavior, and Social Networking website.