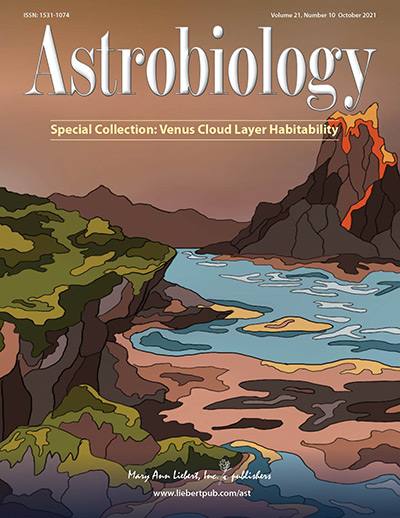 New Rochelle, October 14, 2021—The potential habitability of the Venusian cloud layer based on hints of past water on Venus is detailed in a special collection of articles in the peer-reviewed journal Astrobiology. Click here to read the articles now.

Sanjay Limaye (Guest Editor of this special issue), from the University of Wisconsin-Madison, and Lev Zelenyi and Ludmilla Zasova, from the Space Research Institute, Russian Academy of Sciences, introduce the Venus Collection, a series of papers from the first workshop on habitability of the cloud layer. The workshop was held in Moscow and organized by the Russian Space Agency, Space Research Institute, and NASA. The workshop can be traced to a paper, “Was Venus the First Habitable Planet,” by Michael Way (NASA/Goddard Institute for Space Studies) and colleagues in 2016, which provoked a fresh look at the possibility that life existed on the planet in the past if it indeed had liquid water for a long time, including the possibility that microorganisms could be responsible for absorption of sunlight, and contrasts that of Limaye and colleagues described in a paper published in Astrobiology in 2018.

“This special issue on Venus is coming out at just the right time. NASA just announced two new missions to Venus and ESA announced one as well. Venus is going to be in the scientific focus for some years to come,” says Christopher McKay, PhD, Deputy Editor of Astrobiology, from NASA Ames Research Center.

In this issue, Sanjay Limaye and colleagues coauthored “Venus, an Astrobiology Target.” They present a case for the exploration of Venus as an astrobiology target, based on the likelihood that liquid water existed on the surface in the past, leading to the potential for the origin and evolution of life. They propose investigations into the potential for habitable zones within Venus’ present-day clouds and Venus-like exo atmospheres.

The detection of phosphine (PH3) in Venus’ atmosphere has contributed to the hypothesis that there may be life in the Venusian clouds. Matthew Pasek, from University of South Florida, and coauthors, present two related abiotic routes for phosphine generation within the atmosphere of Venus. Corrosion of large impactors as they ablate near Venus’ cloud layer, and the presence of reduced phosphorous compounds in the subcloud layer could result in production of phosphine and could explain the phosphine detected in Venus’ atmosphere. A paper led by William Bains of MIT concludes that phosphine cannot be produced in the Venus atmosphere by conventional processes.

A paper by Sara Seager (Massachusetts Institute of Technology) and colleagues provides a possible life cycle for the putative microorganisms. Other papers explore other aspects of habitability of the Venus cloud layer, including the potential for phototrophy by Rakesh Mogul (California Polytechnic Institute).

Finding answers to this question is like putting together a jigsaw puzzle except that we do not show what the picture of the pieces put together should look like. The data and inferences from decades of observations do not seem to fit together nicely and many pieces are missing. The ten papers in this collection from the first workshop on the Venus cloud layer habitability represent a beginning of solving the puzzle. The pace is quickening, with more than twice as many papers to be presented at the second workshop on cloud habitability of Venus later this year.

“It is important to find out if Venus was ever habitable and whether its thick, global cloud cover can harbor life today, not just for understanding the origins of life, but also to have any confidence regarding what we infer about habitable exoplanets. The ten papers in the collection are hopefully the first steps in this quest,” says Sanjay Limaye, PhD, Guest Editor, from the University of Wisconsin-Madison.

About the Journal
Astrobiology, led by Editor-in-Chief Sherry L. Cady, Ph.D., at the Pacific Northwest National Laboratory’s Marine and Coastal Research Laboratory (MCRL), and a prominent international editorial board comprised of esteemed scientists in the field, is the authoritative peer-reviewed journal for the most up-to-date information and perspectives on exciting new research findings and discoveries emanating from interplanetary exploration and terrestrial field and laboratory research programs. The Journal is published monthly online with Open Access options and in print. Complete tables of content and a sample issue may be viewed on the Astrobiology website. The 2020 Journal Impact Factor is 4.335.

About the Publisher
Mary Ann Liebert, Inc., publishers is known for establishing authoritative peer-reviewed journals in many promising areas of science and biomedical research. Its biotechnology trade magazine, GEN (Genetic Engineering & Biotechnology News), was the first in its field and is today the industry’s most widely read publication worldwide. A complete list of the firm’s more than 100 journals, books, and newsmagazines is available at the Mary Ann Liebert, Inc., publishers website.